The Shrine of Our Lady of Lourdes

Well an update.
I had the opportunity to visit and photograph the inside of this wonderful building. It certainly bears comparison to many of the churches I have visited.
However 2 photographs just to wet the appetite. More to follow. There is now a link to the datastore which carries many more photos of the inside.


The information below is pasted from the Historic Chapels Trust. It is clearly a modern building, built between 1955 and 1957. Only 60 years old!

The shrine was built as a Roman Catholic convent chapel designed by the distinguished Francis Xavier Velarde.

This entry is a brief copy of his work in the City of Liverpool files. Hopefully this long link will open.
It dates from 1955–7.
Velarde was interested in blending historic styles with modern motifs. The result at Blackpool exhibited a highly individual, expressive, modern interpretation.
The chapel is of Portland stone externally with a copper roof and fleche, it is ornamented with four statues, one at each corner, with a relief on the facade above the entrance by the sculptor David John.
The interior is dominated by gold mosaic columns, supporting a ceiling of vivid blue, red and gold against a background of pale grey rendered walls.
The windows form a high screen of pierced stone forming a bold geometric pattern along each wall. Another link to David John here

A first phase of repairs was completed in April 2008. This consisted of repairs to the leaking copper roof and re-designing a defective rainwater disposal system. The works cost £100,000.
Fundraising has started to raise approximately £500,000 to fund the works required to complete repairs and introduce new facilities to ensure the building can host a wide range of suitable community activities and occasional services of worship.
The following excerpt is from Blackpool Civic Trust:

War memorial thanksgiving chapel, with vestries and entrance steps. 1955-7 to the designs of F.X. Velarde; Eaves and Co., builders.
Portland stone, with copper-clad roof and fleche.
Near-rectangular plan of four bay church with single-bay narthex and sanctuary apse at their respective ends, with projecting vestries at East end.
West end blind, with over round-arched timber double doors a relief of the Holy Trinity by David John, who also sculpted the pinnacles at each corner of the building, which depict our Lady appearing to St Bernadette, Christ appearing to St Margaret Mary, St Thomas of Canterbuy and St Edward the Confessor.  Those at West end are set on fluted buttresses.
Rectangular panels of glazing, filled with alternating square and lozenge tracery patterns of red and blue glass.  Circular motif to tracery in round-headed little vestry windows.  Central fleche with gilded bands contrasting with the copper, and central cross motif, surmounted by cross.
York stone steps between stone flank walls to entrance
The interior is equally magnificently appointed.  Round-arched arcades clad in gold mosaic,  with cross motif, support ceiling of vivid blue, red and gold.  Tiled floor with cross motif.    Raised sanctuary reached up marble steps in apse with round-arched opening.   Sanctuary floor of marble with mosaic panels.  Bronze altar rails of art deco design, related in style to glazed screen at west end of church, which is finished in lacquered bronze.  Altar and reredos of gris mouchete stone carved by David John.
The Shrine of Our Lady of Lourdes, patron saint of the Diocese of Lancaster, was conceived by the Right Reverend Thomas E. Flynn, Bishop of Lancaster, as a thanksgiving chapel to the diocese’s relatively unscathed survival through World War II.
In September 1945 Bishop Flynn wrote: “During the war as the danger became more acute, and one diocese after another suffered terrible losses of life and property, I asked for earnest prayers to our patroness, Our Lady of Lourdes….and we were marvellously spared.  The thought was in my mind during that period of anxiety that after the war I should ask the diocese to make an offering to God to show our gratitude”.
The shrine cost £50,000 to which every parish in the diocese subscribed.  Blackpool was chosen for its central position and ease of access to visitors; a local builder, William Eaves, donated the site.
The shrine was tended by nuns of the Congregation of Adoration of Mare Reparatrice.  Most recently the shrine has been attended by the Blessed Sacrament of Fathers.  Velarde’s work was described in the opening literature as “although original in design (having) its roots in the Ancient Romanesque Architecture”.  While his St Teresa, Upholland, of the same date, shares the combination of modern sculpture, gilded mosaic and round-arched detailing found here, the shrine has a perfect, diminutive jewel-like quality that transcends conventional church formulas.

Do indeed want to see inside this building! 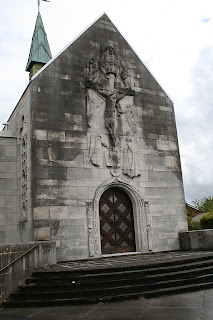 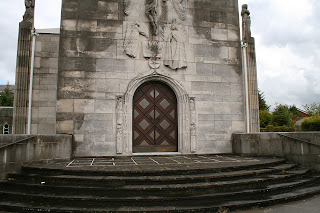 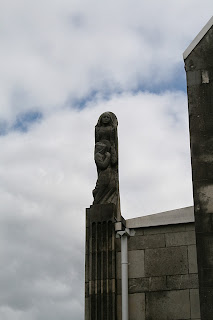 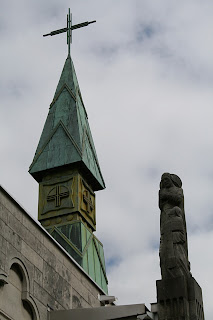 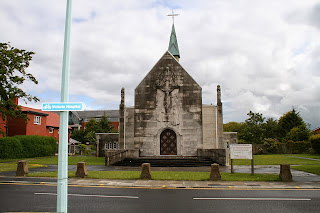