This is another closed church, destined to never to open again regrettably.
Based in the Revoe area of Blackpoo, much of the property here is fine old red brick housing, but way too expensive to maintain and has now been split into flats or multiple accommodation. I boarded on Grasmere Road as a student. It is very close to the College at Palatine road. There will be pictures from this area added later - it has a fascinating history. I spent some time in the school there and also attended the Kedokwai Judo club above the library. There is a link to the Congegational Federation here. However the pix.

The Church is situated at the corner of Lune Grove and Grasmere Road.  It was built I believe in 1900 and lies on the site of another church. References to the original church can be found here.


This is how the Blackpool Evening Gazette reported it:

A church which helped to bond a community for 90 years has been put up for sale.

Bethesda Church on the junction of Lune Grove and Grasmere Road in Revoe, is owned by Congregational Federation Limited and closed its doors in October(2010) because too much work needed to be done.
Members are now having to attend churchservices at the Day Centre on Ibbison Court while pastor Augusta Gibrill looks for a new church.
Connie Parker, 85, from Lune Grove, says the closing of the church was a traumatic experience.

She said:" It was very upsetting because I have been going past the church for 62 years and you get used to it.

"We couldn't afford to to keep it open because there was no money coming in and and we had to close, but we will rise again somewhere."
" It's a pity that it has to be closed but there are a lot of things that need to be replacing."

Bethesda's pastor saved the church from closure four years ago when she agreed to take on the responsibility of running the church.
Mrs Gibrill is now in charge of finding a new home for the Bethesda congregation.

She told the Gazette: "It was going to cost a lot of money to repair and it breaks our hearts.

" If I was to win the lottery I would buy the church and repair it."
The cost of repairs has been estimated at £152,00 and despite the members trying to raise money and save their church they had to move out. Mrs Gilbrill added:" It's a very sad and they (the congregation) is still grieving.

"It was a very busy community resource and that is why I care. It made me ill when I knew it was going to close down.

"Thepeople were very bitter  and they are still very bitter about it because they felt someone should have kept the church open."

Carol Watson, 67, and her husband Victor, 75, from Grasmere Road have both been members of the church for 2 years. Mrs Watson said:"It meant a lot to me because it was a very loving church and everyone felt at one with each other. Any strangers coming in would not want to leave and when the service finished at 12, we wouldn't leave until half one.
"People help me all they canand other people are always asking what they can do for me."

Mr Watson added:" We feel very upset about this. It was such a lovely fellowship, and there are always people together. We are still together as a church and that is the most important thing."
Congregation Federation Limited declined to comment.
alex.ross 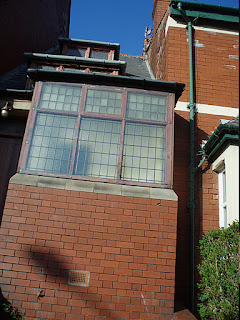 It may be possible to get inside this church. It has had guided tours at times.
Posted by Jol Martyn-Clark at 15:09